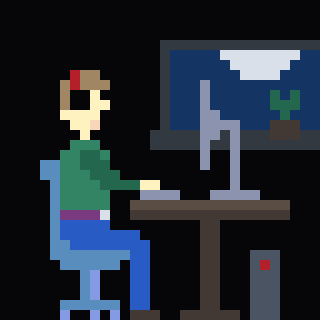 I'm going to develop a game made for a game jam into a full-blown mobile app.

A quick play through of 'Drone Pilot', a game made for the lowrez game jam 2019.

Last month I had a lot of fun doing a game jam, you can read about the game and my experiences here. I decided to take the concept and turn it into a full-blown mobile game. I'll be doing devlogs here but they'll probably lag a little behind my twitter where it's easier to post short updates so follow me on there if you want to keep up to date with the latest developments.

Before diving into mobile development, I decided to go back and add an extra 'final' level to the prototype. The whole game is completely free to download for windows and linux on itch.

Just publish it to mobile stores then

Unfortunately the support for getting pygame applications onto mobile platforms is limited. There are libraries out there that would help get it onto android but from what I've read support for ios is lacking. Pygame is a great tool and obviously by using it you have the power of python and its extensive collection of 3rd party libraries. In this case though building a small game targeting mobile first, it seems like Godot would be a much more sensible choice. It has a lot of built in support for deployments to mobile platforms and rebuilding what I've already done in python will only take a few days.

It's pretty small even for a mobile game

I haven't created a game for mobile for quite a few years so it'll be good to get the ball rolling again with something small but I do have a number of improvements in mind. Firstly, the working title is 'Fly Everything'- I want to include three or four aircraft types (like stunt planes and space shuttles) including my original drones. A rough wishlist looks like:

It's not a huge project and even though I'm going to improve the artwork, I'll be keeping it quite basic. The target for release is November 2019.

The next devlog is available here